Perhaps the most famous black tea of all. Its small leaves infuse a magnificent amber-red liquor with a rich, sweet flavor of dried fruits and honey.

Keemun tea is produced exclusively in Qimen, Huangshan. This black tea is also known as "Qimen Hongcha", the first part referring to its origin. The second part "Hongcha" means "red tea" in Chinese, also known as black tea in the West. In China, this type of tea is called red tea, due to the color of the tea liquor instead of the appearance of dry leaves.

Based on 2 customer reviews

Did you find this helpful? Yes 0 No 0

Did you find this helpful? Yes 0 No 0

16 other products in the same category: 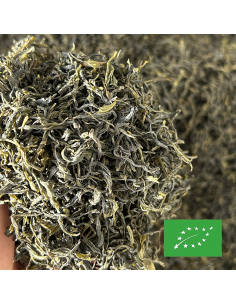 21428
€11.37
Black tea from the Keemun region in China with sweet and slightly cocoa notes. This tea will delight fans of sweet black tea that can be left to infuse for long minutes without bitterness. To take advantage of all its flavors, we recommend putting water at 95 degrees for each infusion and not hesitating to let this tea steep longer than you would with any... 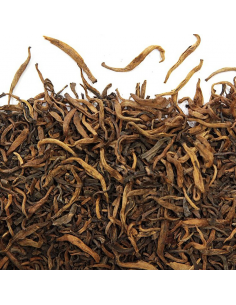 TS16728
1 review
€18.96
This tea is produced in Yunnan with an exclusively picking of buds. It's a Pu Er Shu from 2018 with intense autumnal flavors, mushrooms, undergrowth. We recommend water at 100 degrees, 2g / 10cl and an infusion of 1mn 30 seconds. Multiple infusions are possible.

TCN11
1 review
€45.50
Harvested in Hangzhou in Zeijhang province. The producer of this tea claims that the production of this tea is carried out without synthetic fertilizers and pesticides. Longjing is the most famous Chinese green tea. It is aromatic but soft and velvety with round notes and nuts like almonds, hazelnuts. Infusion tips: 75 degrees, 2 minutes 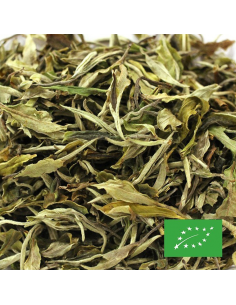 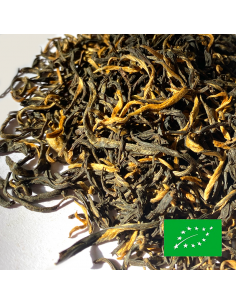 TCN14
1 review
€14.22
Dian Hong is a Yunnan black tea with unique flavors. It is one of the most famous teas in China, still largely unknown abroad. Production date: Fall 2021 Place of production: Lincang Altitude: 1000 to 1500m Cultivar: Yunnan Yun Kang #10 Our Dian Hong, grown at 1000 meters above sea level, has a seductive and sweet aroma, reminiscent of ripe fruit and... 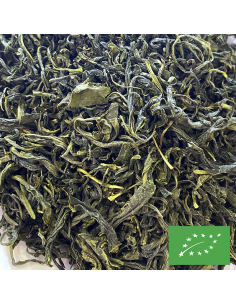 TCN10
€7.11
Wulu is a green tea produced in the Zhejiang chinese province. The flavors are sweet, round, without bitterness. Infusion advice: 75 degrees, 2 to 3mns 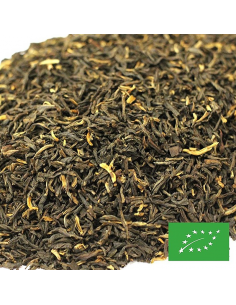 TCN04
2 reviews
€8.53
Black tea from southern China, Yunnan. He is normally referred to as Dian Hong. This Yunnan has full-bodied, dried fruit flavors. Almost no bitterness, you can steep this Yunnan for many minutes. Tips: 90 degrees, 3 to 4 minutes 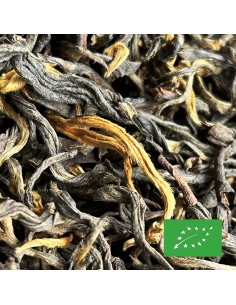 TCN20
€11.37
Mao Jian grade black tea produced in the locality of Jing Jing northeast of Changsha in Hunan. It is a tea with lots of golden buds, with sweet but persistent flavors. The strong presence of fluffy golden buds brings a velvety sensation to the tasting. Brewing tips: 90 degrees, 3-4 minutes 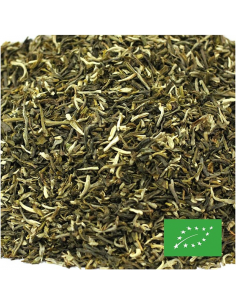 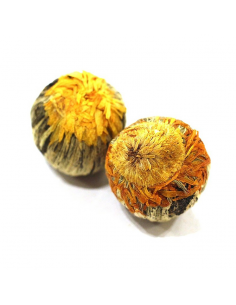 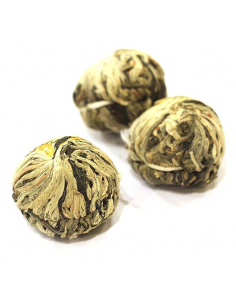 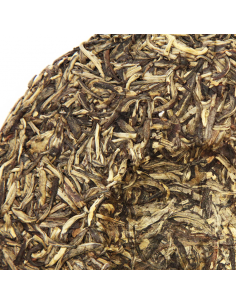 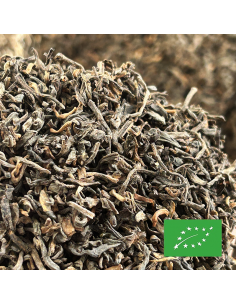 TCN18
€13.27
Puer Shu produced in Yunnan Certified ORGANIC. An excellent quality with a cup with dark rosy hues. The fermented flavors are present, soft and round. It is possible to re-infuse this tea many times. Infusion: 100 degrees, immediately discard the first water then reinfuse at 100 degrees and leave to infuse for 1 to 2 minutes 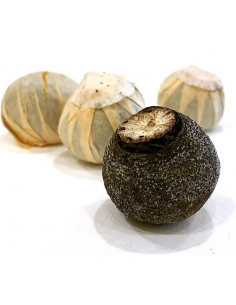 TCN12
€23.70
Mandarin Pu Er is a fermented shu (cooked) tea harvested and made in 2015 and aged in a hollowed out mandarin. The tea is produced in Menghai in Yunnan. It is then put in a mandarin from Guang Dong in the locality of Xin Hui, where it will then be aged.It is advisable to break the tangerine peels and infuse them with the tea.Western preparation: 2g for... 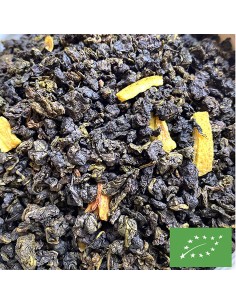 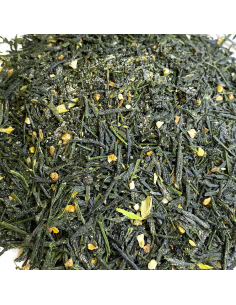 TJ04
3 reviews
€17.06
Flavors: Yuzu Ingredients: Spring sencha from the Makinohara plateau in Japan and yuzu peel from the island of Shikoku Preparation for this hot tea: Infuse 2g for 100ml of filtered water at 70° for 1 to 52 minutes. Prepare this iced tea: Infuse 2 tablespoons in 1.5L of Volvic or filtered water at room temperature. Place your container in the refrigerator... 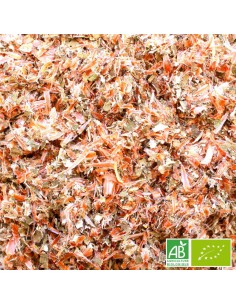 SIC06
€12.73
Ingredients: Pine *, bramble *, thyme * * From organic farming. Mixture made in Auvergne by a cooperative of farmers and gatherers with local plants. 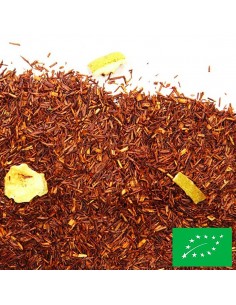 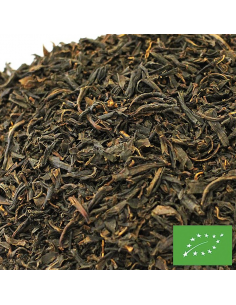 TJ46 / 3900
1 review
€17.06
"A very gourmet Japanese red tea" The leaves of this tea are quite small and well oxidized. After infusion, they produce notes of ripe fruit, camphor and white flowers. The liqueur is very beautiful, golden to perfection. In the mouth, a sweet flavor dominates with a slightly perceptible astringency if you push the infusion a little. The texture is very... 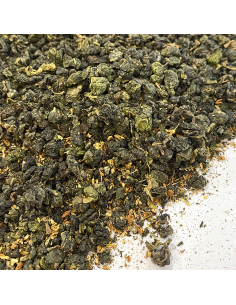 TT22
€15.64
" Flowers and freshness " The little oxidized and good quality oolong used to make this promising tea is associated with white osmanthus flowers, to the delight of amateurs. After infusion, the olfactory notes of the leaves are clearly reminiscent of tea, while those of the liqueur are more on the flowers. On the palate, the liquor is unctuous and the... 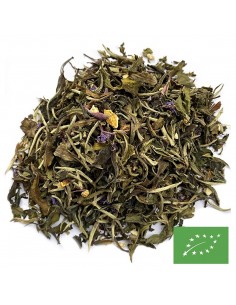 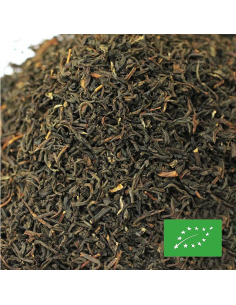 TASS01
3 reviews
€7.11
Finest Tippy Golden Flowery Orange Pekoe 1 from Jamguri Plantation. A fresh harvest for an aromatic tea with powerful flavors. Jamguri is spread south of the mighty Brahmaputra river in the Golaghat region, famed as the quality belt of Assam. The expanse of Jamguri is dotted by ‘Teelas’, little hillocks and the ‘Hullas’, meandering canals which nourish... 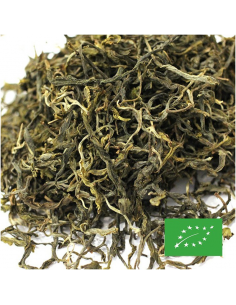 TT41
1 review
€9.48
Tea produced in a small plantation at about 1,200m above sea level, where tea trees have replaced poppy plants since the 1970s. The plantation is subsidized by the Thai state to cover the costs of organic certification of its teas.
Tap to zoom